So, when a right-hand-drive car is in a left-hand-drive country, it’s already something unusual and different. People on the road gawk at it in bewilderment as it drives down the road alongside them, its driver in the part of the car where they’re expecting to see the passenger.

These, however, are more than just right-hand-drive cars cars in a left-hand-drive country. One is a technology-laden, turbocharged Japanese high performance car that has been the Holy Grail for import enthusiasts for decades and has long been regarded as forbidden fruit in the West, while the other is a large, luxurious Detroit boulevard cruiser that prioritizes style above all else and is crafted in the mirror image (literally) of a haunted car from a movie based on a novel by world-renowned horror author Stephen King.

For the first, and possibly last, time, these two cars have crossed paths, two cars that couldn’t be more ideologically different, but have one thing in common: they’re both right-hand-drive.

Thanks to longtime friends at Black Ops Performance, Boosted News is bringing you an exclusive story: a 100% real R34 Nissan Skyline GT-R, driven to the east coast of Florida to Classic Car Creations, where shop owner and builder Earl Shiflett has painstakingly created the only right-hand-drive replica in the world of Christine, the bloodthirsty `58 Plymouth Fury from the eponymous horror movie and novel, for delivery to a customer in Australia.

As John Stagnitta of Black Ops Performance often says, driving a Nissan Skyline in the USA will “cure you of depression.” There are few cars that will garner more attention out on public roads than a Skyline, especially if it’s an R34 Skyline GT-R. “Everyone wants to come up and talk to you about it,” he says. “You can’t not make new friends in a Skyline.”

Powering all Skyline GT-Rs from the R32 in 1989 to the last R34 in 2002 is the RB26DETT, a race-ready, 2.6L twin-turbo, individual throttle body, inline 6cyl engine, and while the RB26DETT was advertised in Japan as only having 280hp in road cars, concurrent with the gentlemen’s agreement at the time, it was making significantly more power than that and could easily make even more with the simple removal of a turbo boost restrictor.

The particular 1999 R34 Skyline GT-R I drove was completely stock other than a Fujitsubo exhaust and a set of Blitz coilovers, yet it was remarkable how well it performs even today, despite being nearly 20 years old. Feeling both turbos spooling up as I merged onto the East-West Expressway in Orlando, just a few miles from the Black Ops Performance headquarters, was an experience I’ve longed for since I played Gran Turismo as a teenager. The RB26DETT has smooth, yet ferocious power, and with the MFD screen on the dashboard giving me vast amounts of information about the Skyline as it drove along, and with a chassis and suspension design that was radically ahead of its time, the R34 Skyline GT-R is a car that still feels fresh and cutting-edge despite its age. 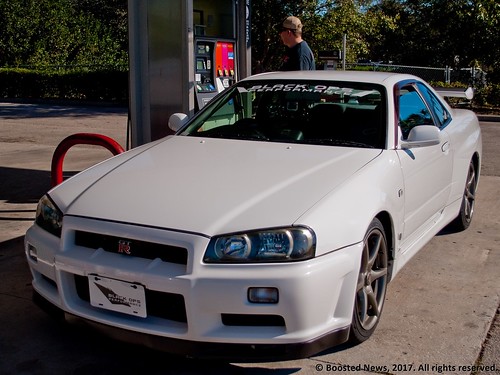 After an hour of checking one big item off my life’s to-do list, I arrived at Classic Car Creations, where Shiflett backed the newly completed right-hand-drive Christine out of the garage and parked it next to the R34 Skyline GT-R for what is by far the most outrageous automotive photo shoot I’ve ever done.

“This was a four-and-a-half year project,” said Shiflett, who runs Classic Car Creations right in the backyard of his Cocoa, Florida home. “It just looks like a `58 Plymouth Christine replica, but the more you dig into it, you’ll see it’s a mirror of Christine, hence its nickname ‘Mirror Christine.'” 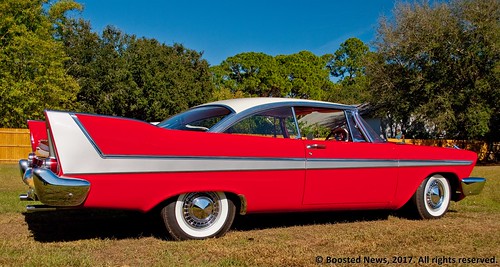 Mirror Christine is not just a replica that has been converted to right-hand-drive. Shiflett took the project into much more detail than that. Using the “Okay, show me” scene from the movie as his reference, he recreated the engine bay precisely as it is seen in the movie, only opposite. The chrome vacuum reservoir for the brake booster is movie correct, with the Quaker State Motor Oil sticker on it, but both it and the booster are on the opposite side of the engine bay. The blower motor and its ducting into the dash are completely custom fabricated and match the movie scene, but are also mirror opposite.

Shiflett was so insistent on making a movie correct car that the valve covers on the engine are actually deceiving. In the same scene, they say “350 CU IN”, but the engine, per the customer’s request, is actually a built vintage Mopar 383ci block, stroked to 477ci with a Chevy-style crank. It has a specially ground high-lift, short-duration camshaft, stainless steel valves, forged pistons, and H-beam rods. Sitting on top of the intake manifold are two 500cfm Edelbrock carbs under two air cleaner assemblies that are, once again, perfectly accurate to the movie scene. Even the battery is an Optima (Shiflett refuses to use wet-cell batteries in any of Classic Car Creations’ builds), but it is encased in a look-alike box that, of course, visually matches the battery in the movie scene.

However, fitting a big-block Mopar engine and accessorizing it to please the most fastidious Christine fan wasn’t enough. “The motor is phased over 2 inches,” said Shiflett. In order to clear the steering box which is now in the right-hand-drive position, the entire engine had to be moved slightly, which means all the motor mount brackets had to be completely redesigned and custom fabricated by Shiflett himself. 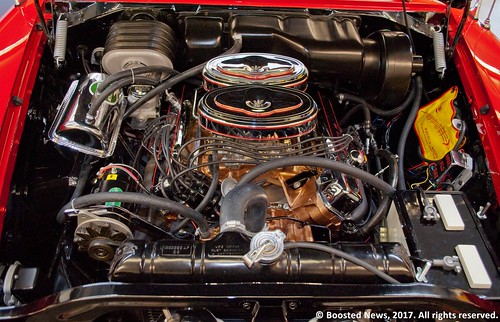 The devotion to creating a mirror image of Christine didn’t end in the engine bay, either. “The dash is a prototype,” he said. “They only made six; this car has one of the remaining ones. A Chrysler executive who was living in Australia had his Fury converted to right-hand-drive. When he sold it, the new owner had the car converted back to left-hand-drive and had no use for the right-hand-drive dash. Long story short, we bought it and had it shipped here, and since `57s and `58s were different, I had to change openings for the ignition cylinder and the lighter and certain little areas.” Furys of this era had shifter buttons rather than columns, so Shiflett had to create a one-off pod for the shifter buttons to reside in on the right side of the dash, next to the gauge cluster, against the A-pillar, once again, mirroring a left-hand-drive Christine replica.

If that wasn’t enough, Shiflett made a new brake pedal where the rod attaching the pedal pad to the firewall is the mirror opposite shape of the pedal in a left-hand-drive car, and even the front seat, which is normally a 60:40 split bench seat has also been reversed. It’s now a 40:60 split bench seat. 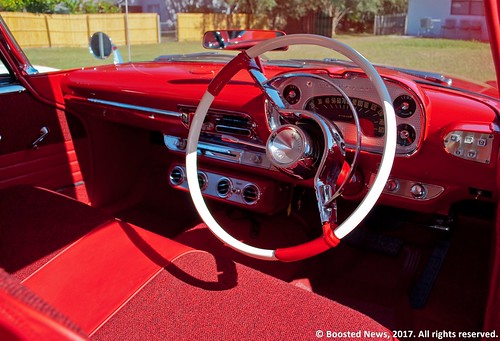 Classic Car Creations is also responsible for the Christine Movie Car, owned by Bill Gibson in Pensacola, the car that recently made an appearance in Sharknado 4. That car, unlike Mirror Christine which is simply a replica, is built from parts of actual movie cars salvaged from a junkyard in California. So Shiflett has experience building Christines, but according to him, that doesn’t make it any easier. “These cars don’t play nice,” he said. Gesturing to his own frame-off restomodded small-block 1957 Chevy 210 sitting in the shop, he said “This is nothing. I can build one of these in a matter of months. Plus, I can go to Eckler’s and get a fender for it tomorrow.”

“But Christine replicas are different. In 2017, it’s not easy to put one together. I’m working with what’s left of what’s left. I have helpers browsing eBay, calling across the country, trying to find parts, and some stuff, I just have to fabricate myself.”

Because of this, Shiflett says Mirror Christine is his last Christine replica. “They’re painful,” he said. “They’re money-hungry cars.”

Shiflett has plenty of other irons in the fire as it is. Classic Car Creations recently finished a Herbie the Love Bug clone for disabled Florida resident Stephen Love, and besides working on his own `58 Plymouth Belvedere which he is restoring to factory-correct specifications, rather than making another Christine replica, they’re also wrapping up a frame-off restoration on a 1971 Chevy Camaro that’s getting a 383 stroker SBC crate motor.

Whether any of the upcoming project cars will be right-hand-drive remains to be seen. 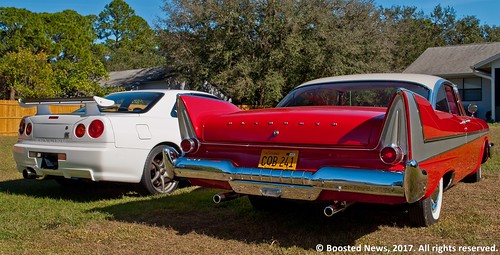 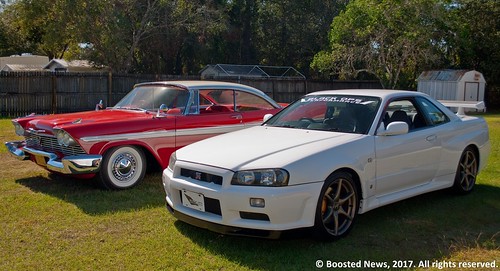 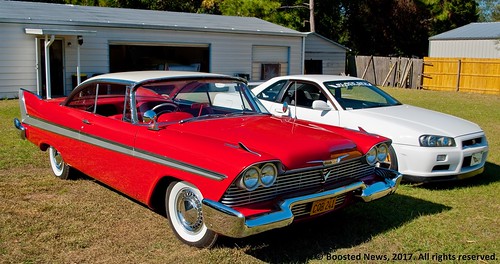 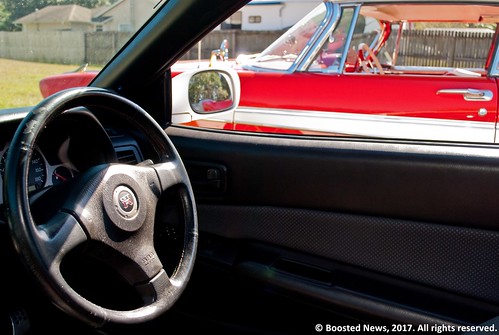 Check out the video below of me driving the Black Ops Performance R34 Nissan Skyline GT-R to Classic Car Creations to meet Mirror Christine: