A basic search of social media and Internet message boards will yield many strongnly-worded opinions on the new Jeep Cherokee. Few vehicles in recent years have been met with as much disparagement upon their debut. But why?

First, the Cherokee rests on the Fiat Compact U.S. Wide platform, developed between Fiat and Chrysler after the Italian automaker took over the American automaker. This platform is shared with the Dodge Dart and the new Chrysler 200, so Jeep enthusiasts quickly castigated the new Cherokee for sharing too much architecture with standard road cars to be of any use once the road was gone.

Then there’s the exterior design. The arrangement of the front fascia is perplexing, as the LED daytime running lights fool onlookers into thinking they’re the headlights, while the actual headlights are projector units situated next to the bottom of Jeep’s signature 7-bar grill. Furthermore, whereas its predecessors’ profiles were comprised almost entirely of right angles, the new Cherokee is devoid of them. Its new shape and style may make it the most aerodynamic Jeep ever (insert the trite joke about being the healthiest patient in the emergency room here), but it’s now clearly a crossover rather than a truck. Those who admire the XJ Cherokees and Liberties of yore for their boxy and utilitarian appearance will find no familiarity with the new Cherokee, which is code named KL.

Jeep fans on those online outlets would have you believe that the new Cherokee is an affront to the Jeep philosophy, abandoning its loyal fans who value unstoppable off-road capability and blocky styling for more, well, orthodox clientele.

But my test vehicle, an Anvil Clearcoat Jeep Cherokee Trailhawk, had thick, knobby 245-series all-terrain tires which filled the heavily clad wheelwells. Bright red tow hooks jutted out from shorter front and rear bumpers designed to increase approach and departure angles. The control panel on the center console had settings like Sand/Mud, Rock, and Snow, and Trail Rated badges affixed to the upper corners of each fender proclaimed that the Cherokee Trailhawk can slog its way through nature’s perils just as one would expect a vehicle bearing the Jeep name to do.

So, are the complaints from the cognoscenti justified? Or has this Cherokee really earned those Trail Rated badges?

An open, undeveloped field outside of Kissimmee, Florida, frequented by other off-road vehicles like ATVs and dirt bikes, would give me the answer. Though there obviously aren’t any mountains to climb, there are still plenty of geographic obstacles there that required the utilization of every one of the Cherokee Trailhawk’s off-road features.

The modern Cherokee’s four-wheel-drive system is controlled electronically rather than mechanically. There are no levers to pull, only dials to turn and buttons to push. So, once I left the pavement, I turned the dial to Sand/Mud, which tells Jeep’s Selec-Terrain system that traction onwards will be sparse. I also put the two-speed transfer case in 4WD Low, and I locked the rear differential, something only the Trailhawk can do. In that configuration, the Cherokee casually navigated its way through every patch of deep sand, through every muddy rut, and up every slippery hill in the entire field with nary a nail-biting moment or an awkward call to roadside assistance. Wheelspin is allowed, as the Sand/Mud mode partially deactivates the traction control, but it’s minimal, and the system prevents any one wheel from spinning too much and digging a hole.

The Fiat origins of the new Cherokee and the encroaching CAFE fuel economy standards mean that the suspension has nothing in common with previous midsize Jeeps. The new Cherokee has 8.7 inches of ground clearance, but the front uses MacPherson struts while the rear uses a multilink arrangement, and the front and rear control arms, as well as the front subframe, are made from aluminum. You won’t find any leaf springs or live axles under the KL Cherokee, so, admittedly, it doesn’t have the suspension travel of an XJ Cherokee. It isn’t as customizable as the XJ Cherokee, either; you won’t have much luck if you take it to an off-road specialty shop looking to modify it for severe off-road duty.

The good part is that the new Cherokee’s ride is vastly superior to any of its forebears. Whereas such an outing in an XJ Cherokee or a Wrangler would have sent my scalp straight into the headliner or taken the loose change from under the seats and put it back in my pockets, my entire test period with the KL Cherokee, both off-road and on-road, was civilized and calm. Not one of the undulations of my off-road adventure ever bottomed out the suspension, nor did I violently shove the Cherokee’s peculiar front end into a berm from misjudging my speed. Also, though I never found myself using the word “articulation,” there were never any creaks or any other unnerving noises coming from the body or the suspension as I navigated through the field. It felt like I was taking a passenger car off-road, and doing it successfully.

Where the Cherokee Trailhawk feels like it’s too car-like, though, is in the drivetrain. Under the hood, which is decorated with a matte black vinyl decal on Trailhawks, is an all-new 3.2L Pentastar V6 producing 271 hp and 239 ft-lbs of torque. Jabbing the throttle on pavement with the Selec-Terrain dial in Sport mode results in smooth and satisfying, if not brisk, acceleration. 0-60 takes 7.8 seconds, and the quarter mile takes 16.1 seconds with an 86mph trap speed. However, compared to the 3.7L V6 in the Liberty, which the Cherokee replaces, the new Pentastar engine makes only 4 ft-lbs more torque, and at a higher point in the rev range. Because the new Pentastar engine is DOHC, and has 24 valves and VVT, it feels peaky and lacks low-end torque, an essential component for off-road driving.

The nine-speed ZF automatic transmission doesn’t help, either. The idea of having a transmission with so many gears is to space the ratios closer together in order for the engine to stay in its powerband as it picks up speed. In theory, that’s supposed to make the vehicle both accelerate more quickly and run more efficiently. But the ratio of 1st is 4.71 and the ratio of 2nd is 2.84, while the ratio of 8th is .58 and the ratios of 9th is .48. The low gears are spaced too far apart; the high gears are spaced too close together. This means the Cherokee can never make up its mind what gear is correct for the driving conditions, which is irksome on the road and problematic off the road.

So, if I were to start an argument with Internet commenters about the merits of the new Cherokee Trailhawk in an off-road situation, I would have to concede that, yes, there are some compromises made to broaden its appeal, and that it needs some tweaking under the hood.

However, what those commenters might not like to hear is that the Cherokee’s place in the Jeep lineup has not changed at all. The Wrangler has always been Jeep’s most hardcore rock-crawling machine, and it still is. The XJ Cherokee struck a balance between off-road capability and everyday usability, and, to this day, it remains one of the best vehicles to ever do that.

The KL Cherokee does that as well. It’s more pleasant to drive than the Wrangler, the XJ Cherokee, or even the Liberty. The interior is easy to grow accustomed to and comfortable, the knobby tires on the Trailhawk are actually rather quiet, and the Pentastar engine is at least much smoother and more refined, if not quite as torquey. It can still do the daily grind with ease, and then go on a camping trip in the woods or to the beach on the weekend.

It may be a crossover now, but it’s still very much a Jeep. 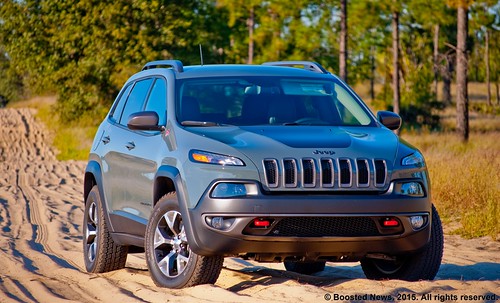 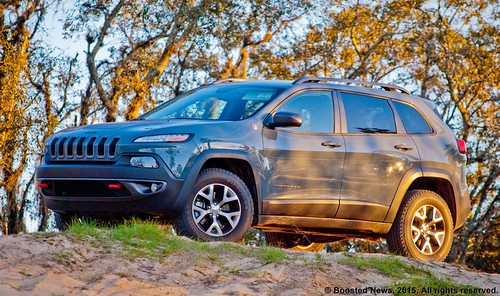 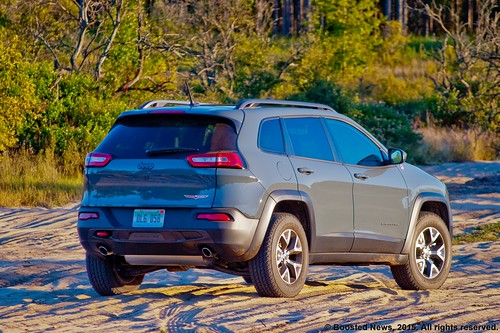 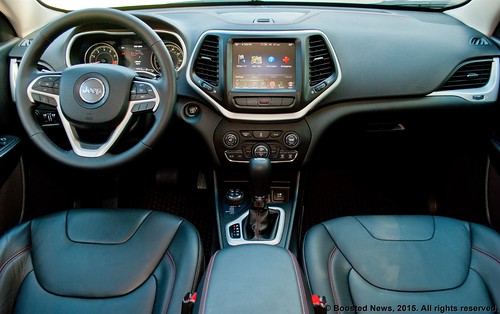 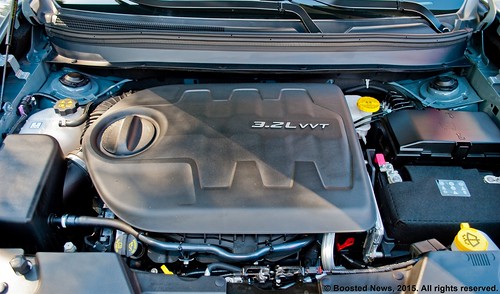 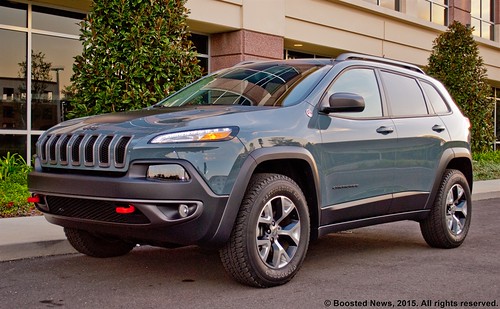 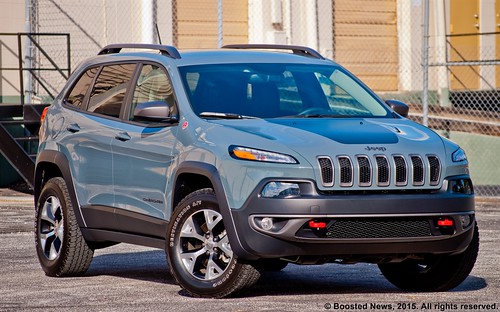 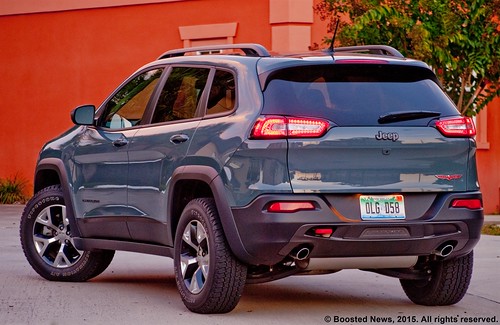