“C’mon, Michael, you should know what that is,” I said quietly to myself after I was told I would be test driving a Mercedes SLC. Self-doubt set in, and I resorted to Google. Oh, it’s the new SLK. Got it. Moving on.

If you’re also bewildered by the new Mercedes-Benz classification system, and don’t feel bad if you are, this is what happened: The C, E, G, and S-classes remain unchanged, but the GLK became the GLC, the ML became the GLE, the GL became the GLS, and the SLK is now the SLC.

It’s not just Mercedes-Benz either. I have a theory that they recently joined Infiniti and Lincoln in a top-secret market research focus group where a sugar-addled 5-year-old was given a box of Alpha-Bits cereal and told to open it himself, and model names were randomly selected from the aftermath.

On the subject of identities, some further clarification is necessary for the name of my test car, the SLC43 AMG. Mercedes-Benz says the engine is “AMG-enhanced,” but it’s essentially the same 3.0L biturbo V6 found in vehicles like the GLS450 plus-sized SUV. It’s not a handbuilt engine from Affalterbach, so the SLC43 is not an AMG in the same way a GLA45 AMG is, for example. Furthermore, no, the SLC43 isn’t quite as powerful as the outgoing SLK55 AMG, which did have a handbuilt 5.5L naturally-aspirated V8 making 415hp. But the AMG enhancement still gives the SLC43 AMG a plentiful 362hp and 384 ft-lbs of torque, the same power and more torque than the much bigger and heavier GLS450.

Now that that’s out of the way, let’s talk about the sound, because the most noticeable AMG enhancement by far is the exhaust. While more conservative Mercs barely make any exhaust noise at all, the SLC43 AMG’s exhaust is unapologetically boisterous. It spits out a rapid “bbbbbt” on every full-throttle upshift and pops and gurgles after a high-rpm downshift. Don’t for a second think it’s noisy just for the sake of vanity, however. The sound under heavy throttle is smooth yet throaty, and it’s loud but not piercing. It’s sonically pleasurable.

The SLC43 AMG’s performance delivers the promises its sound makes, as well. Getting to 60mph takes less than 5 seconds, and the quarter mile is in the rearview mirror after just 13.2 seconds at 108mph. The SLC43 AMG isn’t a featherweight at 3541lbs, but it’s not encumbered by itself either, and its short wheelbase gives a sensation that has become all but extinct in the current automotive landscape: it feels like a big engine in a small car.

Where it does feel a bit more like it was AMG-enhanced rather than AMG-built is when you start to use the steering wheel. Optionally fitted to my test car was the $2,800 AMG Handling package, which adds a limited-slip differential, red painted 4-pot/2-pot brake calipers, and adjustable shock absorbers. Put the button next to the shifter to enter Sport mode to experience the engine’s quickest throttle response, and Sport+ mode to change the suspension to its firmest setting, and then Manual mode to do all of those things and also gain full control of the 9G Tronic nine-speed automatic gearbox, which will not save you from hitting the rev limiter if you don’t pull the upshift paddle in time. Then dive hard into a corner. The SLC43 AMG will hold on as tightly as the jack-of-all-trades Continental Tires will allow, up to 0.87g, and a little extra throttle input will get the rear tires to help you change direction. But even in Sport+ mode, there is enough body roll to be noticeable, and while the steering is nicely weighted, 15:5.1 isn’t all that quick of a steering ratio anymore. It is a fine handling car, which will carry you assuredly through a series of S-curves, but it doesn’t feel like that is its ultimate purpose. It feels like ride quality is the #1 priority, and handling is very, very close behind it.

The Premium 2 package does make the SLC43 AMG’s interior a nice place to be, with ambient lighting, an IWC Ingenieur analog clock on the dash, Apple CarPlay and Android Auto, and terrific bolstered saddle brown leather seats with cooling vents for your neck. So it can claim luxury car as part of its identity if it so desires, and it better be able to at an MSRP of $75,375. But that doesn’t seem to quite capture it, either.

It’s easy to call the SLC43 a pseudo-AMG since the in-house performance company’s involvement amounts to nothing more than “enhancements.” But it’s okay that they’re no more than just enhancements. The ostentatious exhaust and giggle-inducing power are not supposed to be taken all that seriously. The SLC is a convertible, after all, and a handsome one at that. The redesign of the SLK in 2011 sorted out all of the quirks of the awkward sophomore effort, and the facelift that became the SLC is, in my opinion, the best look the model has ever had. But back to my point, two-door convertibles are supposed to be fun, and that’s what the SLC43 AMG is, simply a cheerful salute to the hardcore AMG models.

It’s surprising and even a bit refreshing to see that an automaker as austere as Mercedes-Benz, one that I can easily picture slapping its yardstick down on your desk for failing to memorize all its new model names, can remember to have recess once in a while. 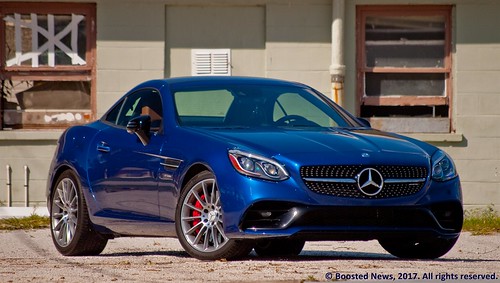 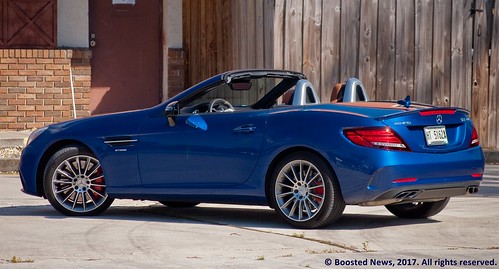 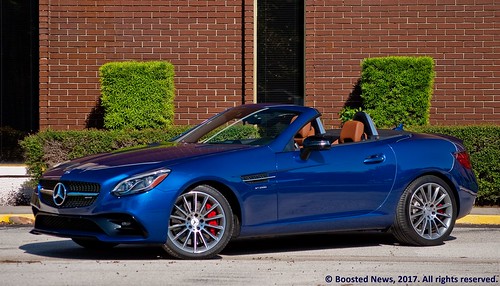 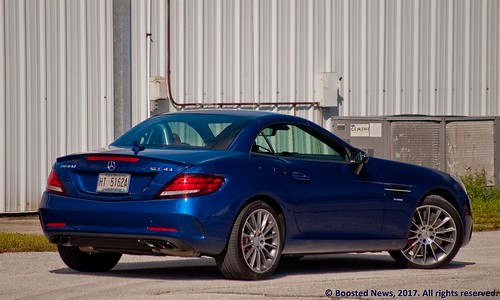