2016 marked the 40th anniversary of the original Volkswagen GTI’s release to the public and the birth of an entire automotive philosophy.

The Mk1 Golf GTI was already 8 years old by the time it arrived in the United States in 1983 as the Rabbit GTI, but its reputation was mythological. Though we never quite forgave Volkswagen for forcing us to make do with a 1.8L 90hp engine in our GTI while they kept the 1.6L 110hp Bosch K-Jetronic fuel-injected GTI all to themselves in Europe, it was still proof that an automaker could build a car that was everything to everybody. It was practical, economical, and simple, yet it was handsomely styled by Giugiaro, and with a curb weight of only 1,785lbs, it was fast, too. It brought all the driving enjoyment of the most exotic sports cars to the masses, to be used reliably every day. The Mk1 GTI is, in fact, the reason the term “hot hatchback” exists.

Alas, 40 years is a long time, and while the GTI grew faster and more powerful, it also grew heavier and more complex, laden with ever more gaudy tinsel as it became the luxurious Golf instead of the high-performance Golf (looking at you, Mk4!)

In 2005, the Mk5 GTI arrived with fresh, modern styling, the FSI engine, a 2.0L 200hp direct-injected, turbocharged, and intercooled 4cyl, and the miraculous DSG dual-clutch transmission, demonstrating that Volkswagen finally remembered what the GTI badge was supposed to stand for. But 12 years later, even the most detail-oriented enthusiasts are forced to admit the GTI has been in a slow evolutionary process since then.

Damn, if it hasn’t evolved nearly to perfection, though.

The FSI engine metamorphosed into the TSI engine; it’s still a 2.0L 4cyl, but several things changed, like the switch from a timing belt to a timing chain and an IHI turbo in place of the BorgWarner turbo. The horsepower has increased from 200hp to 210hp, or 220hp in the case of my test vehicle, an SE with the $1,495 Performance Package. For 2017, the Performance Package goodies (220hp, the same bigger brakes as the Golf R, and VAQ, which I’ll get into later) become standard on all GTIs except the base model. Finally, while I previously called VW’s DSG transmission miraculous, I was ecstatic that I got one with a good, honest three-pedal six-speed manual transmission instead.

The bonus 10hp is certainly appreciated, but it’s the 258 ft-lbs of torque that gives the GTI its churlish, insolent character. Proving that turbo lag is less of a problem than it’s ever been, all of that torque is turning the front wheels as soon as 1500rpm. Spotted a small break in traffic and need to get in it before it disappears? A twist of the ankle is all that’s necessary; downshifting is not. Just had a bad day and need to escape it with a hearty portion of forward thrust? Downshift a gear and make sure you keep an eye on the speedometer, not just to revel in the pace at which the needle sweeps across it, but to keep yourself from having a run in with John Q. Law and making your day even worse, especially if your car is bathed in Tornado Red as my test car was. Need to get to the end of a dragstrip as quickly as possible? You’ll hit 60mph in 6.3 seconds and your E/T slip will read 14.8 seconds and 97mph.

Now, let’s not kid ourselves: the pull of midrange turbocharged torque may be an addicting sensation, but those acceleration times would be astonishing two decades ago. They’re not anymore.

If your primary objective is to stroke your ego with quarter-mile timeslips, the GTI is not the car for you.

If finding the purest embodiment of the hot hatchback philosophy today is your primary objective, the GTI is what you’re looking for.

The most significant component of the GTI’s handling is what Volkswagen calls Vorderachsquersperre, or VAQ for those of us with less masochistic tendencies. VAQ is an electro-hydraulic torque-vectoring system that controls a clutch pack inside the limited-slip differential. According to Volkswagen, VAQ actively monitors and redirects 100% of the engine’s power to either of the front wheels depending on the driving conditions, as opposed to brake-based torque-vectoring systems that waste power in the interest of increased cornering stability. Whereas, in a corner, the inside wheel on an open differential will transform all of the engine’s power into tire smoke, and a mechanical limited-slip differential will just do less of the same, VAQ deliberately transfers more of the engine’s power to the outside wheel, which performs two functions: it accentuates the driver’s steering input during the corner, and it eliminates inside front wheelspin at the exit of the corner, resulting in more effective use of the engine’s power.

From the driver’s seat, all that matters is the driving mode button just next to the shifter on the center console. Pushing it puts the car in Sport mode, which changes three things: it quickens the TSI’s throttle response, and switches the electric variable-ratio power steering and VAQ to their most aggressive settings.

This will transform the GTI from a pleasantly calm and refined car to live with on a day-to-day basis, with a forgiving ride over harsh roads and a carefully tuned intake note that’s audible but not obnoxious, into one of the most tenacious front-wheel-drive cars available today.

It takes some reprogramming of the brain to drive the GTI with VAQ properly, because, if you’re used to driving front-wheel-drive cars hard, you know not to put your foot too hard into it or you’ll just overpower the wheels and start plowing forward. But the VAQ system is counting on you to have some fortitude and take the corner with your foot steady on the throttle so that it can go to work. As with the GTI’s acceleration, the two sides of your brain are fighting against each other: the right side is egging you on to keep going just to see how far you can push it, but the left side will be telling you to hold back to keep yourself out of the traffic violation line at the courthouse rather than careening out of control into a telephone pole. You will wind up in trouble with your town’s finest long before you wind up in trouble with your insurance company.

Further enabling the Mk7 GTI to handle as well as it does (and further evidence of the Mk1 GTI’s influence on its development) is a lower curb weight. Volkswagen claims that nine percent of the chassis is constructed from new ultra-high-strength steel which allows parts of it to be thinner and lighter without any loss of strength or structural rigidity. The newest GTI is over 80lbs lighter than the previous generation, which wasn’t all that rotund to begin with, and that’s a noticeable difference. It not only explains the improved acceleration and handling, but it feels more focused and more willing to perform.

Inside is at least a nice place to be, even if it’s not really state-of-the-art. The dashboard, and especially the gauge cluster, looks by and large the same as the Mk6 GTI, although the center stack is now driver-oriented and the multi-function display in the cluster is now in color. The flat-bottom steering wheel is fat and easy to grip tightly, and there is plenty of room for all passengers, front and rear.

I don’t seem to have much luck with Volkswagen’s in-car entertainment systems. The Fender speakers sound great, but I encountered several glitches. One afternoon, the touch screen and thus the entire system refused to turn on for two whole minutes after I started the car, no matter what dials I turned or buttons I pushed, and dropping the Bluetooth telephone and audio connection was something I experienced more than once.

That’s okay, though, because the GTI is one of only a handful of cars in this price range and with this level of practicality that can make you forget about the stereo system. I have pretty large feet, so I have a different method of heel-and-toe than actually using my heel and toe. I use either side of my right foot to execute the same action, holding steady pressure on the brake with the left side and blipping the throttle with the right side. Some stickshift cars have their pedals spaced too far apart for me to do it my way, but not far enough apart to do it the traditional way. It was a relief to find the GTI’s pedals perfectly spaced to do it my way, making my highway cloverleaf knavery feel more familiar and all the more rewarding.

The shifter is great to use, and properly translates the inner goings-on of the transmission to your hand as you operate it, and while the steering in more pedestrian Volkswagens feels rather dull and artificial, they’ve taken the GTI’s steering very seriously. It’s perfectly acceptable in Normal mode, but Sport mode makes a distinctive improvement, varying the ratio anywhere from 14.5:1 to a bewilderingly quick 9.5:1 and allowing just the right amount of resistance.

However, while I lie prostrate at a lavishly garnished altar in worship of the manual transmission six times daily, I’m obligated to admit that a driver of a three-pedal GTI must sacrifice something enthusiasts today don’t really like to sacrifice: linear, uninterrupted power output. No matter how quickly the driver can shift gears, the TSI’s boost falls off a bit in the process, and takes a small, but noticeable amount of time to build back up once the driver puts their right foot back on the floor. Question a DSG GTI’s driving skill or masculinity or dedication all you want, but his car is not losing boost when the gears in the transmission shift, and that makes for a car that’s simply faster in track conditions. If you choose the manual GTI, you’ll just have to live with the fact that you’re adding a few seconds to your track time in the interest of driver involvement.

There’s one final issue: the price. At $30,531, the GTI is not exactly a bargain next to its competitors, especially on paper, where it has less power and, in some cases, two fewer driven wheels.

But there’s no other car available in America today that offers such a lively and also slightly irreverent flavor of the practical performance car recipe.

Times have changed, and while the Mk7 GTI’s numbers compared to the Mk1’s numbers show just how much has changed in 40 years, the current GTI successfully emulates the character of the original Mk1 GTI.

History does in fact repeat itself, and this time, that’s a good thing. 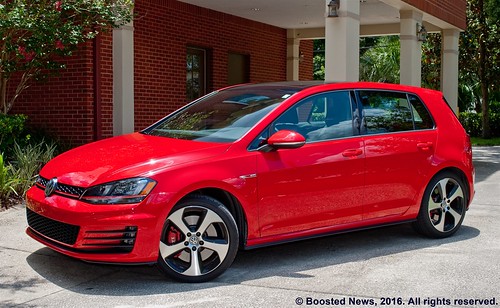 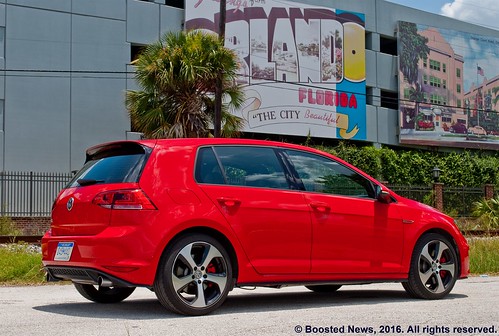 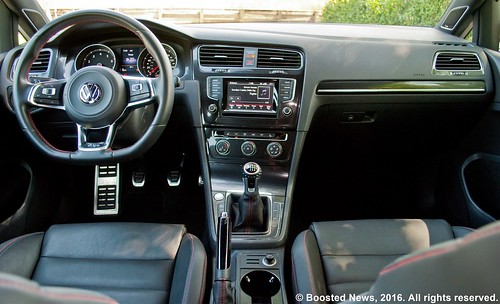 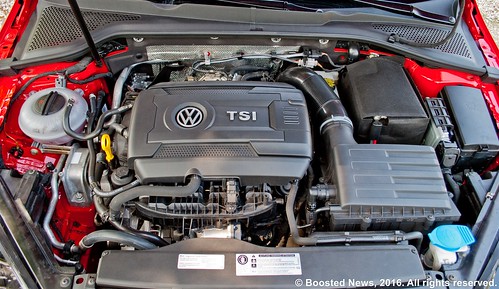 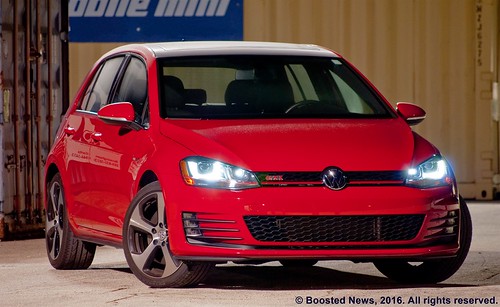 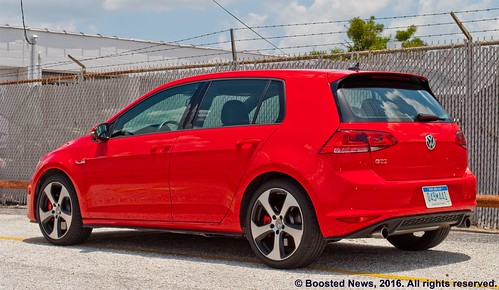